The Monaco Grand Prix never fails to disappoint; the glamorous yet challenging street circuit separates the men from the boys, and is the race all drivers desire to win.

With its limited overtaking opportunities some spectators consider this prestigious race to be boring, however they underestimate the complexity of the sport’s slowest and most difficult circuit. Whilst narrowly swerving around the streets of the Principality, drivers are challenged with tight corners and numerous elevation changes as they negotiate their way through the tight and twisty track, tackling the hazardous hairpins and treacherous tunnel.

This year’s race was spectacularly unpredictable. After the sun shone down on this glittering playground for the rich and famous during practice and qualifying, the rain fell on race day forcing a Safety Car start and put pressure on the team’s strategies as the changing conditions meant the timing of tyre stops would be crucial.

A year on from a monumentally bad pit stop call by Mercedes that cost Lewis Hamilton victory, this time it was Red Bull Racing’s turn to snatch defeat from the jaws of victory. For the second race running, Daniel Ricciardo was left fuming at being robbed – he felt – of the chance at victory by a strategic bungle at the hands of his team.

The Australian’s woes headlined a weekend that he and the team could – and should – have dominated, but to be truthful that wasn’t the only driver/team combination that suffered a significant strain in their relationship this weekend…

Tension continued to grow as the rivalry between the team’s two Championship contenders increased when Nico Rosberg again out-qualified and out-classed Lewis Hamilton during qualifying. The German, hoping for his fourth victory in a row at his adopted home race, started second on the grid with his teammate in third after Hamilton suffered a fuel pressure problem during Q3 that limited him to a single run on the Ultra Soft tyres.

When the racing started on Lap 8, Rosberg struggled to generate the correct tyre temperature. By Lap 16 his pace was dismally slow and he gave up his place to his rival and teammate, citing brake issues as the reason for his lack of pace and eventual seventh-placed finish.

Hamilton set off to chase down the Red Bull of Daniel Ricciardo who pitted on lap 23 to switch from his wet tyres to intermediates, while the reigning World Champion gambled on forgoing the intermediate tyre choice between the full wets on which he started the race and the untreaded slicks. He masterfully managed his wet tyres until changing to the ultrasoft slicks on lap 34. Red Bull followed suit, calling the Australian in for a change to the Super Softs; incredibly however a miscommunication meant the tyres weren’t ready and the delay cost Ricciardo the lead.

The fight was on between the Mercedes and the Renault powered Red Bull Racing RB12. Hamilton held off any challenge from Ricciardo, although the pressure was on when the Briton, losing time and traction behind a backmarker, overshot the chicane on Lap 37.

Ricciardo got a run on him as they reached the exit and vented his anger and frustration when Hamilton blocked him, legally as declared by the stewards after an investigation. After that he never really got close enough again to challenge, and Hamilton stormed to his 44th Formula 1 victory and second Monaco crown.

It should have been a dream weekend for Daniel Ricciardo. After a strategy switch at the previous race in Spain cost him victory, the Australian was on fire during practice and qualifying in Monaco, securing his first ever Formula 1 pole position and the most crucial pole on the sport’s calendar.

With the Safety Car start to the race, the Australian’s position could not be challenged. Even when racing began after the track started to dry out, it appeared all he had to do was lead the pack around the circuit for 78 laps to victory.

But there is no such thing as a “sure thing” in Formula 1 and when he was called in by the team to switch to dry-weather tyres he expected them to be ready and waiting for him; but they were not. An inexcusable miscommunication within the team saw Ricciardo lose valuable seconds on a botched pit stop which ultimately cost him the race.

As for Red Bull’s newest recruit, what a difference a fortnight makes. Max Verstappen, fresh from his maiden Formula 1 victory in Spain, was forced to start the race from pit lane after crashing in qualifying when he clipped the front right wheel of his car on the exit of the Swimming Pool.

With the help of the Safety Car start, the young Dutchman was able to catch the back of the pack and started to make progress once the field was released, charging his way to tenth position.

But Monaco is an unforgiving circuit, especially for such a young and inexperienced driver. Despite appearing comfortable and confident in the tricky conditions, the 18-year-old made a mistake on the climb to Massenet, locking up his brakes and crashing into the wall. It was his third accident in two days – and his second at that corner – which took plenty of gloss off the youngster’s heroic performance two weeks’ prior.

After qualifying a disappointing sixth, Kimi Räikkönen was relegated to eleventh on the grid after a five place penalty for a gearbox change made after final practice.

Struggling to get any grip in the wet conditions, he understeered off at the hairpin on Lap 11, striking the barriers and breaking his front wing. He limped through the tunnel to the Nouvelle Chicane with the wing lodged under his front wheel, but escaped penalty when later facing the stewards for continuing to drive with his Ferrari in a dangerous condition.

Teammate Sebastian Vettel still brought home the points in fourth place, but it was a disappointing weekend for the German. After topping the time sheets in the final practice session, he was unable to match the speed of his former teammate’s Red Bull and again found himself lining up on the second row of the grid.

He attempted to undercut the cars in front by pitting before any of the top-ten runners to change to intermediate tyres as the track started to dry out. This left him behind the Williams of Felipe Massa who opted to stay on the wet tyre and Vettel struggled to pass him.

By the time Massa did pit, the four-time World Champion had lost too much time and found himself behind Sergio Pérez who had moved his Force India up from an eighth place start to third. Although a podium place was within Vettel’s reach, he was unable to find the space to pass.

Mercedes, Red Bull and Ferrari each potentially have a vacant seat up for grabs in 2017.

Nico Rosberg is still to negotiate a new contract with Mercedes and will neither confirm nor deny he has had talks with Ferrari. After bowing to team orders in Monaco and moving over for rival Lewis Hamilton, can the German endure another season in what has become a highly strained situation at the Sliver Arrows? Rosberg is happy when he is winning, but if Hamilton’s victory at Monaco is the start of his 2016 resurgence, can Rosberg withstand the pressure?

Exact details of Ricciardo’s performance based contract are unknown, but it is thought that the option for next year is dependent on the performance of both the driver and the team meaning either could have the option to part ways. Red Bull has “screwed” the Australian two races in a row now and any further issues could be the last straw for the Honey Badger.

But where could he go? The only teams of calibre are Mercedes and Ferrari. Mercedes, for the most part, are big on letting their drivers race and not employing team orders so that could be a good fit. But is Lewis Hamilton as a teammate a good fit for Ricciardo?

Whereas at Ferrari, although Ricciardo showed in 2014 that he is not intimidated by a four-time World Champion as a teammate, Vettel is the de-facto Number 1 at Ferrari and will not welcome being pitted against the driver who resoundingly thrashed him in identical machinery during their last year together at Red Bull Racing in 2014.

Ferrari is yet to exercise the option on Räikkönen’s contract, although Vettel has reportedly – and not surprisingly – stated the Finn is his preferred teammate. But how much pull does the German still have with the Scuderia? Is their patience running out? Or do they accept they are still in a rebuilding phase and may have to wait another year or two before their Number 1 driver returns them to the glory of old.

As we move into the Formula 1 silly season, only time will tell. 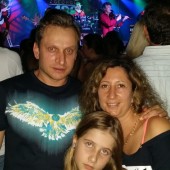